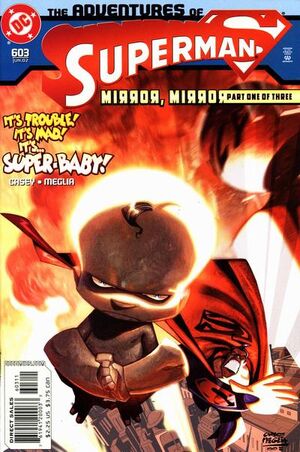 Superman descends from the clear blue sky, stopping short of the ground to hover a foot above the White House lawn. Flanked by his bodyguards, President Luthor stands smug with his arms crossed across his chest. Lex praises the JLA messaging system, because he didn't have all day to wait for Superman to show up. Superman, very annoyed, proceeds to tell Luthor about the situation in Jarhanpur and its resolution. Luthor tells Superman that information is the true source of power, and one can never have too much. Superman tells Luthor that while he respects the presidency, he may have to reevaluate how he treats Luthor. Rising into the sky, Superman tells Luthor not to call in case of an emergency, because Superman will know before he does.

In Metropolis, a group of doctors and one camera-toting expectant father cluster around a woman in the midst of labor. The father excitedly reports that it is a boy as the doctor tells the new parents that they have a healthy baby. Suddenly, the two parents look on in shock as a bright light begins to shine.

Outside of the hospital, panicked patients and staff run through the doors when suddenly a huge burst of energy shatters every window and sends people and cars flying. A bolt of energy extends from the top of the building, as a baby soars skyward. With a cry, the newborn send waves of energy through the Metropolis sky.

A news helicopter flies in close, trying to get a shot of the child. But as soon as they get within range, the baby lifts its hands and bolts of energy lance out and across the helicopter. As the vehicle spins downward, Superman suddenly appears and intercepts the craft. Superman easily hoists the copter above his head and heads toward a nearby roof. Setting the startled crew gently on the roof, he takes off toward the child.

Dodging energy blasts, Superman closes in on the baby. He realizes that the energy is tied into the baby's emotional state, and he's having a temper tantrum. With a cry and a blast of energy, Superman is suddenly knocked flying by yet another outburst. Superman crashes in to the ground as the baby begins to calm down in the sky above.

Three fighter jets soar toward Metropolis. Receiving clearance, all three let missiles loose, targeting the small child. The baby just looks at the incoming projectiles and screams. On the ground, Superman sees that all they are doing is scaring the child, and making the situation worse. A huge ball of energy suddenly expands outward from the infant and knocks all three aircraft out of the sky. The energy blasts are getting worse. If Superman doesn't do something soon, they are going to consume the entire city.

Replacing the downed jets, a squad of LexCorp troopers closes in on the child. After warning the newborn to cease its aggression, they open fire on the baby. Realizing that he has to contain the baby soon, Superman turns from the battle and heads out from Metropolis. With another outcry, the child sends all five attackers tumbling down toward the ground. Lying shocked on the ground, one of the incapacitated troopers looks skyward to see Superman flying back into the city with the sphere of his Fortress of Solitude held above his head. Depositing the Fortress in the holographic sphere of the Daily Planet to keep it hidden, Superman turns and heads toward the baby.

Superman swoops in and intercepts the screaming child. Crackling with energy, Superman streaks toward his fortress, hoping to reach it before the child lets loose with another outburst. The pair of Superman and Super-baby enter the sphere just as the child erupts again, lighting Metropolis up with a globe of energy.

Inside the fortress, Superman holds the exhausted child. Improvising a holding cell, Superman proceeds to study the child and try to figure out what is happening with it. Turning away from the child, Superman begins to study the computer readouts. He finds that the child is emitting traces of antimatter with its energy outbursts. Suddenly a huge explosion sends chunks of the fortress flying. Superman turns, to find Ultraman|Ultraman hovering above him.

Retrieved from "https://heykidscomics.fandom.com/wiki/Adventures_of_Superman_Vol_1_603?oldid=1406165"
Community content is available under CC-BY-SA unless otherwise noted.