Start a Wiki
Part of the 'Superman: Ending Battle' event 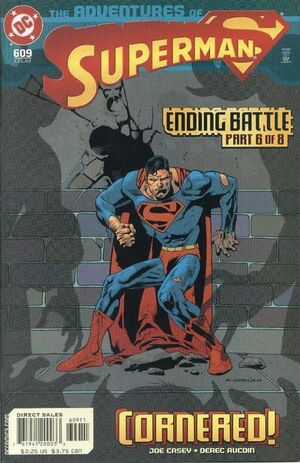 Superman crouches on the ground in pain from being exposed to the Kryptonite in Metallo's chest. As Metallo taunts him, Superman grits his teeth and wraps his arms around the chains connecting him to Metallo. With a sudden surge of strength, Superman fights through the pain and pulls Metallo down. Swinging the villain around his head, Superman sends him flying over a guardrail. Master Jailer sees the Kryptonite broke loose from Metallo and go sailing off, and quickly dives after it.

Recovering his strength, Superman takes to the sky. Around the bend, he finds his city teeming with villains. Dozens of evil doers surge forward, but Superman just bats them aside. At this point, none of them are powerful enough to give the exasperated hero a moment's pause.

Inside WGBS, a group of men lead Senator Calvin Kale around the building. The men are trying to find their way, but really just hope that Superman will save them. The Senator then proceeds to question why they need Superman at all.

Outside, a giant woman composed of energy begins to devour buildings. Superman simply tells her not to do that, before blasting through her stomach and sending her crashing to the ground below.

Back in WGBS, Kale continues on his rant. He says that Superman isn't fighting for them, he is just fighting. Nothing he does accomplishes anything.

Superman continues to subdue villain after villain, finally sending one crashing through the wall of the nearby WGBS building, and into the stairwell with Senator Kale and the rest. As the others scramble for cover, Kale gazes out of the hole and into the sun, where he sees Superman battling the hordes of rogues.

Superman takes out a few more before he decides to change his tactic slightly. He takes to the air and aims his heat vision carefully. With perfect precision, he reflects his blast off of the villains, taking down another group.

Inside the Steelworks, Lois tells Jimmy that she just can't wait any longer. She needs to be out there reporting. She convinces him to stay behind and take care of everyone, as she heads out into the chaos.

Senator Kale and his group proceed on. Kale says that Superman, and all of his kind, just use Metropolis for their playground, and every day they live there, they are risking their own lives because of the superheroes.

Outside, Superman interrogates one of the last remaining rogues. He refuses to answer any questions. As Superman drops him to the ground, a voice brings his attention around. Standing there are Bizarro, Mongul, Silver Banshee, and Master Jailer, the latter holding the Kryptonite.

Inside their apartment, Lois lights a candle to dispel the darkness. A knock on the door brings her to the peephole. Looking out she sees one of her elderly neighbors. Opening the door to help her, Lois is confronted by Manchester Black.

Retrieved from "https://heykidscomics.fandom.com/wiki/Adventures_of_Superman_Vol_1_609?oldid=1571341"
Community content is available under CC-BY-SA unless otherwise noted.