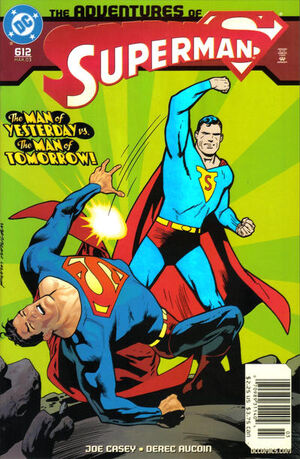 A man who looks somewhat like Superman appears on the scene in Texas and begins to take the law into his own hands.

Meanwhile, Clark Kent goes to see Ben Conrad give a speech on the mid-nation farm man and his influence on the writing life he's lead. Later, over dinner, they discuss how Ben helped Clark become a reporter, and they discuss his new fiction book, "Champion of the Oppressed."

Much later, the hero who resembles to Superman makes the news and identifies himself as "Champion of the Oppressed," which he is describe as a hero fighting "social aggression" after he intervene in stopping the police from beating rioting workers at the Deltimar Diamond Refinery. Ben has also watch the news from his home and is immediately confronted by Clark about the Champion; in which Ben tells him about Champion being a fictional character from his book that somehow came to life due to his writings, but quick to defends on the man's actions.

But when Champion's actions becomes more violent and eventually attracting the attention of the military, Clark tries to reason Ben and telling him to delete Champion before everything goes out of hand. After talking with Ben, Clark immediately flies to confront Champion. Just as Superman meet Champion, Ben finally deletes his manuscript and erasing Champion in the process. As Champion fades away, Superman tells him that though his methods were not on the right track, he would carry on his dream to fight for truth, justice, and the American way.

Later, Clark apologizes to Ben that things had to end in such a way. Ben reassures him, but as Clark is leaving, the author is also working on another work call "The Hollow Men".

Retrieved from "https://heykidscomics.fandom.com/wiki/Adventures_of_Superman_Vol_1_612?oldid=1406174"
Community content is available under CC-BY-SA unless otherwise noted.