Start a Wiki
Part of the 'Valentine's Day' event 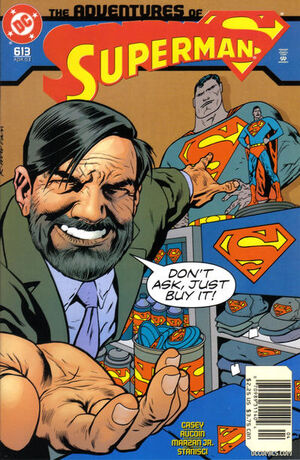 Lois proceeds through checkpoint after checkpoint. After being cleared through every level of security she is led down to a sealed lab. As the door slides open, Lois is shocked to see a man hovering in a sphere, and completely colorless. Lois approaches one of the doctors and questions him about the condition. The doctor declines to answer, but does tell Lois, off the record, about the man. His name is Major Victory, and he the first and only documented case of what they are calling 'anti-chromatic syndrome'. His brain is registering like a coma, but from his screaming inside the sphere it is clear that his true condition is anything but comatose.

Lois returns home to find the apartment dark. Opening the note taped to the TV, she learns that Clark is off preventing a meteor storm. He apologizes for not being there and says he will call as soon as he can. With a sad look, Lois heads to bed.

The next morning in the Daily Planet, Lois speeds along at her computer when suddenly a tour group passes through the newsroom. She notices that nearly every one of them is sporting Superman gear. She stops a straggler and asks him where everyone bought the Superman apparel and he tells her about a new store that just opened up across town.

Heading downtown, Lois finds herself standing outside of a concrete building; Superman symbols emblazoned on the walls. Proceeding inside she dodges around children and adults alike, and moves to the office in the back. Inside she finds Funky Flashman. He tells her that Superman is bigger than every other icon combined, and he is making peoples' dreams come true. She asks about legal rights but he tells her that they just laughed when he tried to copyright the logo. He also tells Lois that he's got a factory of third world workers cranking the merchandise out. With a smile on his face, Flashman excuses himself.

Walking out of the building, Lois calls her husband and explains the situation to him. Clark asks if he should take care of it, but Lois says that she'll do it, as it will give her something to do at night. Clark then apologizes for being away so much, and offers to make it up to her with a date that evening. He tells her to rent a penthouse suite at the plaza and meet him there that night. He says that he'll just swing by the apartment to change clothes and then he'll be there. With a smile on her face, Lois tells him to wear the uniform.

That night Lois, clad in an evening gown, prepares for Clark's arrival. She suddenly turns around to find Superman hovering in the darkness. The two play out their roles, Lois asking the interview questions and Superman answering them. Then, picking Lois up, the couple soars into the moonlight. Flying high into the sky Superman pulls her close and, wrapped in his cape, the two kiss passionately.

Flashman stands in front of an assembled group of reporters announcing his new superhero line, encompassing everyone from Wonder Woman to Green Lantern. Amidst the crazed consumers Lois catches up with Flashman. She again questions whether what he is doing is right, but Funky just ignores her. Then, Lois tells him that as long he is selling everything else, he should be selling supervillain merchandise as well. Funky pauses for a second and then celebrates "his" genius for thinking of it.

That night Lois watches Flashman's new commercial as he displays his new supervillain line. That night, Flashman retires to his office and makes a phone call to discuss franchising his business. Suddenly the temperature in the room begins to drop and abruptly Flashman's hand is hit with a ray, trapping it in ice. Captain Cold stalks towards the entrepreneur with a grim expression on his face and tells him that he represents the villains, and they aren't going to stand for their likeness being abused for his profit. Leveling his freeze gun at Flashman's head, Cold tells him that he is going out of business. Flashman's screams, until his screams are suddenly cut off.

On Valentine's Day, Lois returns home to find a note from Clark taped to the television. He says that he took care of the manufacturing plants and that he has no intention of missing their Valentine's Day tradition. That night the couple lies together, sleeping soundly without a care in the world.

Retrieved from "https://heykidscomics.fandom.com/wiki/Adventures_of_Superman_Vol_1_613?oldid=1406175"
Community content is available under CC-BY-SA unless otherwise noted.