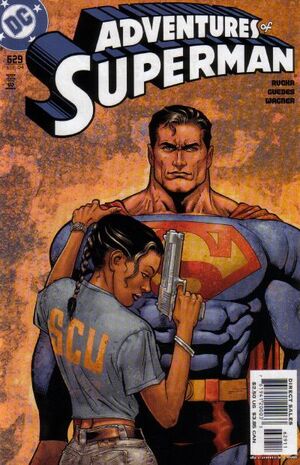 Clark gets ready for the day, showering and shaving, as he thinks about the email Lois had sent him. She is still waiting for her assignment, but she tells Clark that she will be as careful as she can be, and that she loves him.

On the other side of the world, Lois Lane arrives in Umec and is partnered with Beau Wright from the Keystone Gazette. They will be embedded with a unit known as the 'Death Knights' during the conflict.

Clark gets to work just as the Lieutenant and Jerry head off on patrol. Clark turns on the police scanner, hearing the SCU deploy.

Somewhere else, a shadowy figure grips controls, commenting that he's fighting the controls, just like his father did. But it won't do him any good either.

The SCU arrives at a battle zone to find vehicles thrown into buildings and people fleeing. They hit the ground just as an energy blast hits a building behind them. An officer tells them that it sounds like the same man they fought the other day, Replikon. Coming down from the sky, Superman asks them to let him have a chance first. Superman tells them that Replikon had two children, this is probably his son.

Flying inside, Superman introduces himself to Xlim. Xlim asks Superman for help, telling him that he can't control it. The mysterious controller commands Xlim to attack Superman, and he punches the Man of Steel into the ceiling. Flying back down, Superman grabs Xlim and tries to remove the harness from his head, but Xlim screams in pain. He isn't wearing it; it's a part of him. As the controller presses a button, Xlim tells Superman to run before a blast of energy sends Superman flying out of the building. The SCU opens fire on Xlim, before Superman can get them to stop. Suddenly Superman crumples to the ground. Getting back to his feet, he says that he felt drained all of a sudden. While he was down, Xlim got away.

The next morning Superman lands in Lieutenant Leocadio's apartment. She calls from the bathroom for him to come in. As he walks towards the door, she tells him that she can't have him giving her men orders in the field. Walking into the bathroom, Superman finds Lupe in the bathtub. He apologizes for barging in and turns his back, but Lupe tells him she doesn't mind... and then invites him into the tub with her. He declines and she gets out of the tub. He politely ignores her innuendo, but she tells him that she's very patient when she sees something she wants.

Sitting down at her computer, Lupe pulls up a picture of Replikon. Superman tells her that whatever Xlim shot him with the day before, it completely wiped out his powers for about thirty seconds.

The cloaked figure tells Xlim that he doesn't like forcing him to fight Superman, and he'll let him go, as soon as he's finished.

In Umec, arriving on the scene, Lois meets the group of soldiers who she'll be traveling with, who promptly tell her that they're stationed fifty miles away from the front lines.

Retrieved from "https://heykidscomics.fandom.com/wiki/Adventures_of_Superman_Vol_1_629?oldid=1406191"
Community content is available under CC-BY-SA unless otherwise noted.