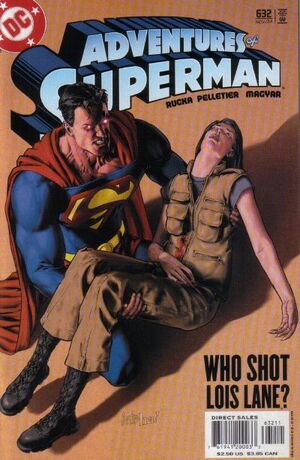 Covering the conflict in Umec, Lois Lane is shot by an unknown sniper. Superman is there in less than five seconds, and takes her to a field hospital for treatment.

Meanwhile, Xlim and Ruin are loaded into a van and being transported to Stryker's Island. In the van, Ruin tells Skeeter that Superman is hurting the Earth by soaking its sun up, and that things will end soon. His warning is treated with mockery from the SCU officers in which their second-in-command Skeeter tells Ruin that his mask is coming off at the jail. Ruin tells Skeeter that he's already dead.

At the Daily Planet, Perry White blusters about and demands that someone get Lois on the phone, seeing as one side of the war where Lois was stationed has just surrendered with the arrival of Superman. Jimmy Olsen informs Perry about Lois' condition. This prompt an upset Perry to call Clark, which the Martian Manhunter takes the call for Clark and acts distraught, telling Perry he will call him back. Martian Manhunter calls the Justice League and informs them of the emergency.

At Stryker's, the SCU opens the van carrying Ruin and Xlim, but only to find all three SCU guards inside to be dead, shriveled corpses, including Skeeter. Xlim swears that he had nothing to do with it and that it was Ruin who did it.

The Flash, in disguise for the JLA, informs Superman that Wonder Woman's jet is outside, and that they're ready to take Lois.

Lupe gets the call about Ruin's escape, and orders an APB for Ruin. She goes to the hospital to check on the people doused with Ruin's chemicals, and they're thrashing, in pain. Ruin suddenly appears, and Lupe opens fire on him. Ruin blows her aside and tells the patients that it hurts, yes, because birth always hurts.

Meanwhile, Doctor Mid-nite got the call about Lois' condition and proceed in working on her. Later, Doctor Mid-nite informs Superman that she should be okay, as long as over time she recovers well. Superman takes a moment alone with his wife, telling her that he won't leave her.

Retrieved from "https://heykidscomics.fandom.com/wiki/Adventures_of_Superman_Vol_1_632?oldid=1406194"
Community content is available under CC-BY-SA unless otherwise noted.