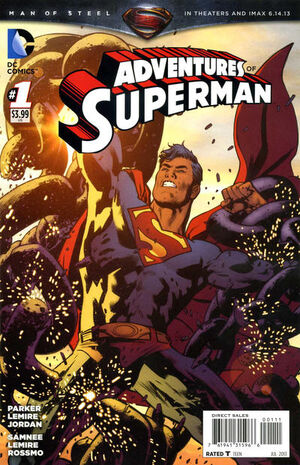 Leon Torsik, a local perp who has recently acquired telepathic powers, is wreaking havoc in Metropolis. Superman arrives to stop Torsik's rampage. Torsik screams that someone gave him that drug that gave him powers. As Torsik's powers increase, he breaks a gas main, causing a large fire. Superman attempts to calm Torsik down, but Torsik dies all of a sudden. Examining his corpse, Superman finds a substance similar to methamphetamine crystal. As Superman helps with the clean-up, Lex Luthor watches the scene from his limo. He was the one who gave powers to Torsik to find a way to kill Superman.

Two young boys play "superhero", one of them plays Superman but the other cannot decide which bad guy he wants to be (General Zod, Lex Luthor, Brainiac, etc). After playing their games, the boys feel hungry and return to home to eat some pizza. They also talk about no matter who plays the bad guy, Superman will always win. Superman watches the boys play with a smile on his face.

Bizarro comes to Metropolis wanting to help people, but his skewed sense of morality makes him cause trouble instead. Superman attempts to reason with him, but a fight ensues. Eventually, Superman calms him down and explains that there is a way for Bizarro to help people. He gets Bizarro a job at NASA, where he is equipped with surveillance cameras to explore Mars. Considering that Bizarro's work on Mars will take years, Superman says that Bizarro will help people in this way.

Retrieved from "https://heykidscomics.fandom.com/wiki/Adventures_of_Superman_Vol_2_1?oldid=1406220"
Community content is available under CC-BY-SA unless otherwise noted.