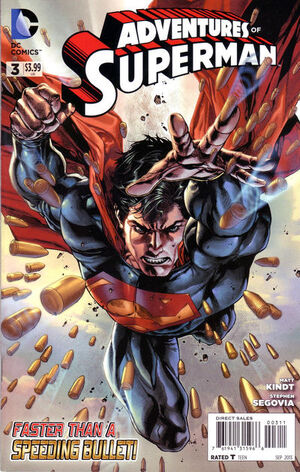 Appearing in "Faster Than A Bullet"Edit

Synopsis for "Faster Than A Bullet"Edit

As Clark gets up in the morning, he gets a distress call from Green Lantern Laira; she needs his help in stopping a giant worm attacking the planet Jayd.

Meanwhile, Lois gets an interview with Luthor, who is about to make a big announcement. While Superman fights the alien worm, Lois has to go through Luthor's words of self-appraisal. To stop the creature, Superman performs a lobotomy. Luthor says that he is running for president of the United States.

After defeating the worm, Superman arrives to the next crisis a little late, as the place is being hit by bombs. At the same time, Luthor announces Lois will help him win the election. Lois does not believe Luthor can win the election because a lot of people know of Luthor's true nature. That is why Luthor needs Lois; everyone trusts her and with her on his side, he can win.

Superman disables the missiles and goes to the planet's library to investigate the reasons behind the war. The reason is simple: land and resources. To end the war, Superman digs through the planet's surface and finds a crystal that can provide free, clean energy to the planet for a thousand years.

As Superman leaves the planet to go to the next crisis, a boom tube opens right in front of him, taking him to prison filled with Kryptonite in Apokolips. Meanwhile, Luthor threatens to kill Lois' loved ones if she does not help him get to the White House.

Superman and fellow prisoner Infinity Man try to find a way to escape. The Infinity Man also tells Superman that he has seen Earth's future; if Superman does not save a man's life, Earth will fall in a dark age that will lead to the end of all life. Superman breaks his restraints, escapes from Apokolips and returns home.

Meanwhile, Lois is unimpressed by Luthor's threats and takes her leave. However, Luthor has planted explosives on the door; if Lois opens the door, she will die. Superman saves the one man whose life would cause Earth's destruction and takes away the explosive on the door, saving Lois as well.

Later, Clark and Lois both arrive at their morning date with each other.

Retrieved from "https://heykidscomics.fandom.com/wiki/Adventures_of_Superman_Vol_2_3?oldid=1406222"
Community content is available under CC-BY-SA unless otherwise noted.