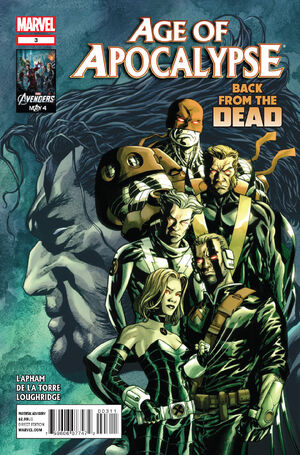 After a night undercover at the Hellfire club, Goodnight akes a report to Prophet: Shaw is angry at the potential consequences of resurrecting the Alphas, as it cuts down on his influence in Weapon Omega's court. Prophet decides to arrange a meeting with Shaw, and sends Goodnight to track down someone.

At Dark Beast's lab, McCoy & Sugar Man work to resurrect Apocalypse's finest warriors for Weapon Omega using the Life Seeds stolen from the body of a dead Celestial. Their current attempt, Prelate Alex Summers, is a success. Cyclops, his older brother, is outraged, but McCoy says his orders come from the top. From a nearby hiding place, Fiend looks on in horror.

Meanwhile, at the X-Terminated's base, Harper Simmons is at a loose end. Jean Grey decides to try to convince Horror Show to be nicer to his father, citing the fact that Victor Creed has changed immensely from the man who abandoned him. She also says that if he is drunk during a mission again, Prophet is going to sideline him.

In New Apocalypse, Sebastian Shaw goes for a walk. He is ambushed by Prophet, who hands over all of the X-Terminated's data on Azazel.

The X-Terminated go on a mission to Dark Beast's lab, where Prophet expounds on a plan to see them through. Inside the base, Fiend is discovered while sabotaging the resurrection of Abyss, and is gravely injured. Just as the rest of the team is about to break in, they are ambushed by Keeper Murdock.

In New Apocalypse, an amnesiac man is met by Goodnight. It seems he used to be Bruce Banner, the Incredible Thing...

Exodus appears on the cover, but his body isn't seen among the others during the issue.

• Jean Grey continues her training to join the X-Terminated. • The humans find their “atomic bomb” to defeat Wolverine.

Retrieved from "https://heykidscomics.fandom.com/wiki/Age_of_Apocalypse_Vol_1_3?oldid=1406448"
Community content is available under CC-BY-SA unless otherwise noted.