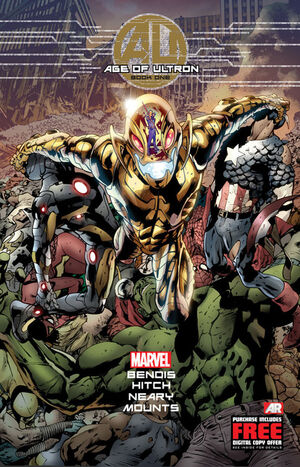 The story opens with the city of New York, which looks completely obliterated, ravaged, destroyed, and above it all it floats a gigantic technological fortress.

Hiding inside the alleys of the ruined city, Avengers member Hawkeye assaults a group of Mutant Growth Hormone dealers, killing them with his arrows. Clint discovers that the group is led by The Owl and Hammerhead, who are also holding a hostage. Owl and Hammerhead head out to confront Hawkeye, who keeps his raid going forward, eliminating the members until he reaches the basement where the hostage is held and is revealed to be Spider-Man.

Owl and Hammerhead battle Hawkeye while he tries to take Spider-Man out, only to be suddenly struck by a massive shockwave caused by a fleet of mechanized sentinels in the shape of Ultron. Owl tries to reason with the sentinels, arguing that "they had a deal", while Hawkeye shoots his explosive arrows to one of the sentinels, buying him and Spider-Man time to escape as the remaining sentinels assault the place.

After their escape, both heroes arrive to a downed Helicarrier in what once was Central Park, only to be confronted by Luke Cage and She-Hulk who hold them for Iron Man to check on them to see if their clean from any infection from Ultron. Cage ans She-Hulk argue with Hawkeye that he shouldn't have left the refuge but Clint refused to have Spider-Man left behind and the fact that most of the remaining heroes have "given up" and without a plan, but Iron Man points out that Captain America is thinking a plan (although Cap looks severely depressed and his shield is completely shattered).

Retrieved from "https://heykidscomics.fandom.com/wiki/Age_of_Ultron_Vol_1_1?oldid=1406988"
Community content is available under CC-BY-SA unless otherwise noted.