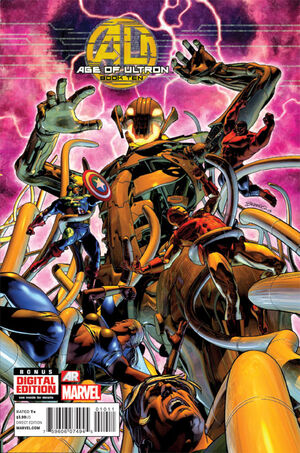 The scene moves to months before Ultron's attack, where Henry Pym is working in his lab and he has given a package from a hidden Invisible Woman. Henry watches a video of his younger self telling him that Ultron will return and supplies a pack of equations on how to stop him for good.

Months later, the Avengers attack the headquarters of the Intelligencia to rescue Spider-Woman-- the event that led to Ultron's revival. When Ultron is revived, Henry Pym contacts Iron Man to supply the equations he was given and upload them into Ultron. Ultron is jarred to realize he is being defeated, holding off the Avengers, but the code is fully uploaded to shut him down with the virus finally killing him.

Wolverine and Invisible Woman return to the present happy to see New York City completely back to normal. Before they can celebrate, a massive shockwave echoes through time and space as reality seeming to shatter before being pulled back together.

At Avengers Tower, Henry Pym, Iron Man, and Beast theorize that Wolverine's constant time travel journeys caused too much stress to the space-time continuum and has created various tears across the fabric of the entire multiverse. In the Ultimate Marvel universe, Miles Morales is out as Spider-Man when a flash of light echoes to reveal Earth-616's Galactus.

The biggest secret in comics will be revealed to you! An ending so confidential…even the artists of this book don’t know what lies on the final pages…! A surprise so big that comic book legend Joe Quesada himself returns to the pages of Marvel Comics to draw a sequence that people will be talking about for years.

Retrieved from "https://heykidscomics.fandom.com/wiki/Age_of_Ultron_Vol_1_10?oldid=1406989"
Community content is available under CC-BY-SA unless otherwise noted.