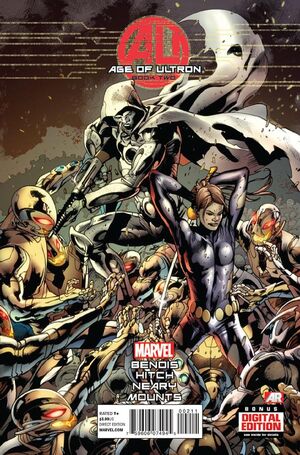 Sneaking around on the streets of a decimated San Francisco, a partially disfigured Black Widow meets with Moon Knight in one of Nick Fury's old bases.

Back in New York, Spider-Man recalls how he simply woke up and found the world under attack. As the heroes ponder why Ultron would take over the world and still make deals with low-level criminals like Owl and Hammerhead in the case of Spider-Man, the distraught Captain America finally informs the other heroes that he now has a plan.

Retrieved from "https://heykidscomics.fandom.com/wiki/Age_of_Ultron_Vol_1_2?oldid=1406980"
Community content is available under CC-BY-SA unless otherwise noted.