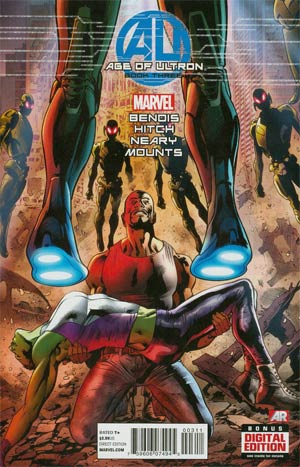 Luke Cage. What do you offer?

Walking through the ruins of New York, Luke Cage and She-Hulk prepare to meet with Ultron. In a flashback is revealed that the remaining heroes located in New York are discussing the next plan of action. Captain America proposes that, since Spider-Man was meant to be traded, they could do the same, but this time sending someone strong enough to cause damage within Ultron's fortress.

After discarding the missing options like Thor or Hulk, both Luke Cage and She-Hulk step in to take the trade. After arguing for a while, Luke agrees to make She-Hulk the offer and he makes the delivery.

Meanwhile, in Chicago, Red Hulk, Taskmaster and Black Panther watch a group of Ultron Sentinels, planning to make a move. Red Hulk jumps into action after Taskmasters detects one and manages to rip off its head, giving it back to his allies, but wasn't fast enough to shake off the group of sentinels chasing him. Red Hulk holds off the Ultron Sentinels to allow Taskmaster and Black Panther to escape, but in the middle of the mayhem, T'Challa dies.

Back in New York, a group of Ultron Sentinels reach Cage and She-Hulk and guide them through the fortress to make the deal, but Luke finds himself shocked when it turns out the offer is not going to Ultron, but to Vision.

Retrieved from "https://heykidscomics.fandom.com/wiki/Age_of_Ultron_Vol_1_3?oldid=1406981"
Community content is available under CC-BY-SA unless otherwise noted.