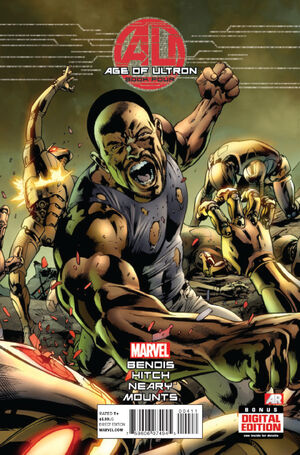 Inside Ultron's fortress, Luke Cage confronts Vision asking why this happened and if he had something to do with it, to which Vision replies that Ultron is controlling him from the future, using him as a conduit to punish humankind. Having heard enough, She-Hulk wakes up and starts battling the Ultron Sentinels, while sending Cage away from the site to warn the remaining heroes. She-Hulk puts up a fight, but she's eventually killed by the Sentinels.

Outside the fortress, Cage goes flying by the swing from She-Hulk until he's caught up by Ultron Sentinels, who make a full scale assault on him. Cage fights them off as best he can, but they manage to subdue him with a nuclear blast, which is witnessed in the distance by the remaining heroes, who managed to escape Manhattan thanks to the combined efforts of Storm and Invisible Woman.

Meanwhile in San Francisco, Black Widow reveals to Moon Knight, after he wakes up, that she opened a black box containing doomsday scenarios devised by Nick Fury, including against Ultron, which is located in Savage Land. With no other options, they agree to march towards the Antarctica. In Chicago, Red Hulk ambushes Taskmaster, who was trying to escape with the Ultron Tech they took over. Letting him know that he doesn't trust him, Red Hulk kills Taskmaster.

Eight days later, the heroes arrive in the Savage Land, where they are found by Ka-Zar, one of the few remaining humans living there. He leads the heroes to their refuge where he reveals that Luke Cage is in there, a fact confirmed by Wolverine's acute sense of smell and Emma Frost's telepathy. However, they reveal that Luke is dying from the radioactive blast he endured, and barely managed to get to the Savage Land to deliver his final message. Emma lays out Luke's discovery of Vision being manipulated by Ultron and they try to make a plan, that is until Red Hulk, Moon Knight and Black Widow arrive telling the heroes that they already got one, courtesy of Nick Fury.

Retrieved from "https://heykidscomics.fandom.com/wiki/Age_of_Ultron_Vol_1_4?oldid=1406982"
Community content is available under CC-BY-SA unless otherwise noted.