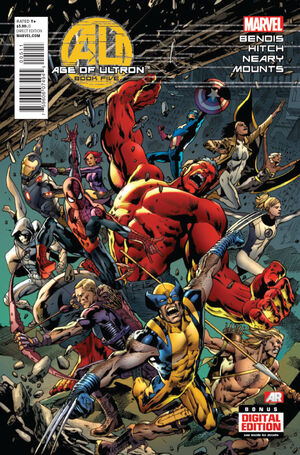 I've seen everyone die at the hand of this thing. This thing killed Thor, the Thing, Luke Cage... Nick Fury and those guys...? They ain't gonna make it back. And I ain't come this far in life to let it all go to hell like this. Start it up and let me put the world back the way it's supposed to be... And just so we're clear, I ain't askin' for permission.

As Ultron's forces lay waste to Austin, Texas, the heroes in the Savage Land find a hidden bunker. They meet Nick Fury, who relates his plan to use Doctor Doom's Time Platform to go into the future with a strike force to defeat Ultron before he attacks the present. Tony Stark points out that Ultron will know they are coming and will be ready for them.

In an attempt to save the lives already lost, and also due to his confused moral beliefs, Wolverine suggests using the platform to go back in time to kill Henry Pym before he creates Ultron. However, most of the others disagree with this idea due to all the good work Pym had done for the world. Valkyrie suggests going back to tell Pym to not build Ultron, but Wolverine points out that will just dare Pym to do it anyway.

Iron Man, Captain America, Nick Fury, Red Hulk, Storm, Quake and Quicksilver use the platform to go into the future, while the rest of the heroes stay behind. After they leave, Wolverine announces his intention to carry out his plan to travel into the past and kill Henry Pym anyway, citing that Ultron's invasion never comes to pass.

Retrieved from "https://heykidscomics.fandom.com/wiki/Age_of_Ultron_Vol_1_5?oldid=1406983"
Community content is available under CC-BY-SA unless otherwise noted.