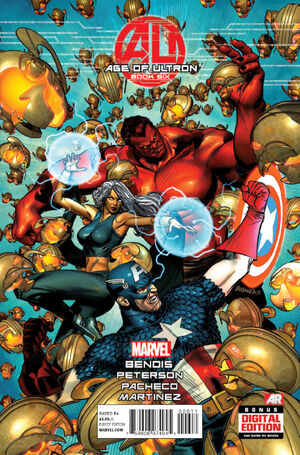 The story starts in the past when Wolverine arrives through Doctor Doom's Time Platform right after the group of heroes led by Fury went to the future and assault Ultron. Seeing he landed in the Savage Land, he's surprised to see the place look totally safe, but then detects another presence which turns out to be Susan Storm, who jumped alongside Logan in the last minute ditching Fury's team in order to stop Logan from crossing the line and killing Hank Pym as he intends to do.

While they argue, another presence emerges, which is revealed to be the past version of Nick Fury. While cloaked with Susan's powers, she and Logan manage to steal Fury's Flying Car and head to New York, where Susan tries to convince Logan that the plan is to convince Pym to not go through the creation of Ultron and avoid an assassination of major consequences to the time stream.

Meanwhile in the future, Fury's team starts planning the assault against Ultron, while they realize that Susan Storm left them at the last minute, but Tony Stark remarks that it wouldn't have mattered anyway since Ultron has heat detection systems. Fury commands the heroes and head for a full scale assault, giving the command of the rest of the mission to Captain America, only to be suddenly assaulted by a swarm of Ultron Sentinels. The assault becomes more and more intense, and the heroes fight with everything they have but all hope seems to be lost as the swarm grows bigger at every time

Logan and Sue arrive to Pym's Laboratory to discover him (who at the time was on his guise as Goliath) working on Dragon Man, becoming inspired to create an Artificial Intelligence, which is implied it would eventually become Ultron. Logan enters and warns Pym that, even though he did good as an Avenger, he will create something awful that will destroy everything in the future but Pym fails to recognize him and avoids his warnings, leaving Logan ready to go with his original plan of killing him. Pym grows to giant size and a battle ensues, but Logan gains the upper hand until Susan tries to stop Logan from killing Pym. Pym pleads to Sue to stop Logan, but then Logan reminds Susan of the deaths of her family and friends and how things will become if he doesn't do it. Susan becomes emotionally torn and in spite of Pym's pleas, she sorrowfully turns her back, allowing Logan to slash his throat killing him.

After Susan asks Logan what's the next move, he simply replies that is time to go back to the present where everything should be better than when they left.

The point in time where Logan and Sue Storm arrive and find Pym analyzing Dragon Man happened in Avengers #42.

Retrieved from "https://heykidscomics.fandom.com/wiki/Age_of_Ultron_Vol_1_6?oldid=1479120"
Community content is available under CC-BY-SA unless otherwise noted.