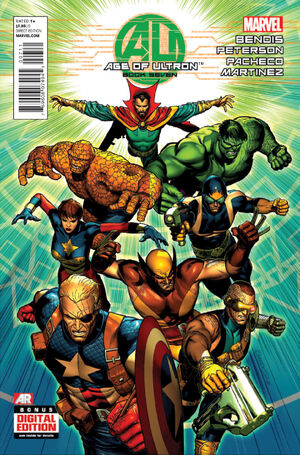 What have we done?!

Wolverine and the Invisible Woman return to the present only to find the Savage Land covered by wreckage of crashed ships. Sue recognizes them as Kree and theorizes that in this new timeline, the Kree-Skrull War came to Earth. They see men in armor calling themselves the Starkguard checking the area out. The two then go to New York City, with multiple S.H.I.E.L.D. Helicarriers around.

Their flying car is shot down as they find themselves attacked by the Defenders (consisting of a one-eyed Captain America, Doctor Strange, Hulk, Wolverine, the Thing, a one-eyed Cyclops, the Wasp in Captain Marvel's costume, and Star-Lord). The Thing is surprised to see Susan "back" but the rest of the group believe the two are Skrulls.

A fight breaks out with the two Wolverines going at it hard, the old Wolverine putting down his double and saying they did what they had to do to make a better world. The Defenders realize they aren't Skrulls and reluctantly realize they have to talk to "him." At that moment, a half-cyborg Tony Stark flies in with a platoon of armored robots demanding to know what's going on.

Retrieved from "https://heykidscomics.fandom.com/wiki/Age_of_Ultron_Vol_1_7?oldid=1406985"
Community content is available under CC-BY-SA unless otherwise noted.