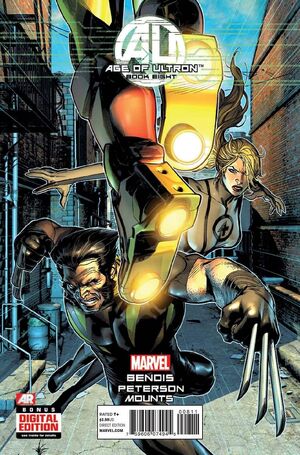 You think this world is a better place? You absolute fool.

Iron Man runs a psychic scan on Wolverine and the Invisible Woman, stunned to see the alternate reality alongside Professor X and Emma Frost. They tell Iron Man these memories are real but Stark believes Morgan le Fay planted them as spies. Iron Man meets the original timeline Wolverine explaining his injuries due to a war between Latveria and Asgard where Thor vanished and Morgana conquered half the world. He shows Wolverine the footage of him killing Henry Pym saying the Avengers broke up afterward magic overcame technology and "you broke the world."

At the Helicarrier, the Defenders' Wolverine decides to talk to his other self and the others help him push past Emma Frost with the Thing wanting to help Invisible Woman. Iron Man chastises Wolverine on simply killing Hank Pym saying he could have gotten Pym to put a virus to stop Ultron instead. Invisible Woman breaks free causing Iron Man to believe this is all a Morgan le Fey trick.

At that moment, Morgan le Fey attacks with a swarm of magically-powered Doombots. The Defenders fight them with Iron Man controlling hundreds of drones and accusing Morgan le Fey of having sent the time travelers back in time. She claims innocence and then points out to Iron Man how a pair of Helicarriers are crashing into the heart of New York City.

Retrieved from "https://heykidscomics.fandom.com/wiki/Age_of_Ultron_Vol_1_8?oldid=1406986"
Community content is available under CC-BY-SA unless otherwise noted.