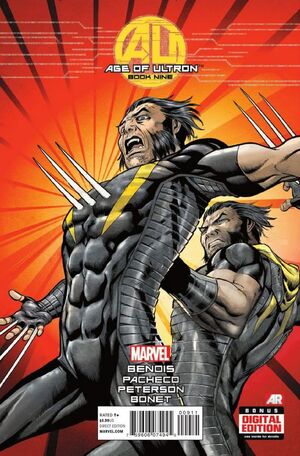 Listen to me, the reason... the reason why we don't go back and forth through time and fix things... The reason we don't just do whatever we want whenever things don't go our way is because we can't. Time is an organism. It's part of us. It lives and breathes and every time you travel through it, you rip it. You tear it. You hurt it. If you keep doing it eventually you will kill it. You'll break it beyond repair. Do you hear me? What happens when time is dead? What happens when you kill it? It's not just us-- We're not alone in the universe...

The Helicarries explosion kills most of the heroes present as Wolverine pulls himself out from the wreckage. A dying Tony Stark tells him he can't simply go back and try to change this again, that time is a living organism that will break if ripped too much.

In the past, the previous Wolverine is about to kill Henry Pym when the newer Wolverine (clad in his classic costume) comes to stop him. After using an incident from their past to convince his double of who he is, the newer Wolverine warns that killing Henry Pym will just make things worse. Henry Pym claims he won't build Ultron, but Wolverine says he has to in order to allow history to continue. Henry Pym says he can build a better A.I., but with a shut-off switch if he needs it. Invisible Woman arrives to tell him he has to forget all this too with Henry Pym confused as to how that happens.

In the Savage Land, Invisible Woman and the two Wolverines have returned with the two Wolverines moving to a cave. The newer Wolverine tells his double there's only one way to solve their issue and he doesn't want to live with the memories of the world he saw. The past Wolverine kills his double and returns to a stunned Invisible Woman. Back at Avengers Mansion, Henry Pym is putting together the first version of Ultron who calls him "Daddy".

And now, with one final chance…can they make it right?

Retrieved from "https://heykidscomics.fandom.com/wiki/Age_of_Ultron_Vol_1_9?oldid=1406987"
Community content is available under CC-BY-SA unless otherwise noted.