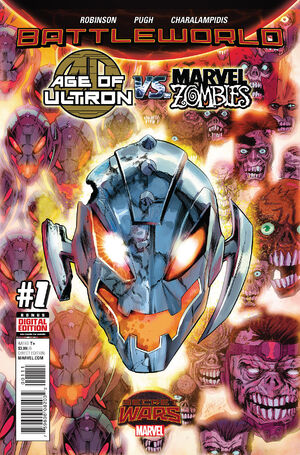 Appearing in "Part 1: A Stranger Came to Town"Edit

THE ULTIMATE DEATH SENTENCE IN BATTLEWORLD

• …where WILD ZOMBIES feast on those who’ve been banished for crimes against the state.

• Pity those who get caught between the two, for their death WON’T be fast and painless!

Retrieved from "https://heykidscomics.fandom.com/wiki/Age_of_Ultron_vs._Marvel_Zombies_Vol_1_1?oldid=1430521"
Community content is available under CC-BY-SA unless otherwise noted.