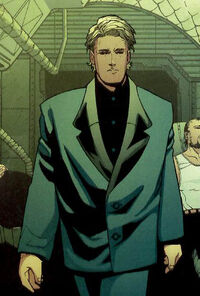 From an early age Agent Wax was a very introspective individual with a keen mind for deduction and stoicism, eventually going onto become an proficient member of the National Park Service's field agents. Unbeknownst to the organization or his primary operator, Agent Downs, Wax was actually a Super Powered Being with mental suggestion capabilities, a power he uncovered at the age of fifteen. According to Wax, he inherited his abilities from his parents who kept their own extranormal proclivities a secret from the world. However, he also revealed that they possessed great animosity towards one another, with prominent destructive capacity to match. They ended up murdering each other as a result.[1]

He first met the Wildcats when he was hunting a serial killing Superhuman named Sammy "Slaughterhouse" Smith, whom was seducing and killing young women with the surname "Marlowe" for the sake of hunting and trying to kill Jack Marlowe the C.E.O of the Halo Corporation and inheritor of Jacob Marlowe's will.[2] After the subsequent murder of his partner Agent Mohr, Wax would take leave of the NPS due to finding himself disillusioned with his current work ethic given the egregarious manner in which a fellow agent had expired.[3]

But he could never let go of the chance encounter he'd had with Marlowe & Grifter after the Smith case had been absolved, the private investigator in him wouldn't let him live it down. Wax would spend weeks tracking down Marlowe's associates, monitoring their habits and haunts until deciding to approach them at his leisure.[4] After a while of scoping out Dr. Stone's civilian I.D. Wax lures him in with a bupkis computer debugging job offer in order to squeeze information out of him about Marlowe and their little outfit. Using his hypnosis to lull Jeremy into a more compliant state to learn everything he can about Jack a.k.a Spartan and Grifter; whom Wax later found that had the former kill the SPB they were all after.[5]

Just before a confrontation broke out, Marlowe; now boasting the power of the Void entity, would port in to interrupt open hostilities. He then offered former Agent Wax a job opportunity in which he would keep a close eye on the National Park Service, making sure they didn't investigate the billion dollar mogul's company nor delve too deeply into his personal affairs.[6][7] After a lengthily inspirational speech by his new contact about the future and HALOs place in it, Wax would go back to work at the Service after having quit due to the death of his partner at the end of their shared assignment, returning to active duty as a pencil pusher in the NPS due to receiving a demotion by his condescending employer. In actuality however Wax was operating undercover in the agency under the supervision of Spartan.[8] A task which would keep the service out of the offices of HALO and enlisted Wax as a trusted confidante within Hadrian's coaxing.

His superior officer, Agent Downs, prevented him from doing his job properly due to longstanding grudges and so he consigned the returning abettor to a desk jockey, then eventually a chauffeur for his overbearing wife. As payback, Wax used his hypnotic powers to rape Down's spouse (not just once but on a regular basis) after she'd worked his last nerve one too many times.[9] Eventually, his boss found out about the affair and tried to kill him and his wife for the forced infidelity, but Wax made Downs kill himself instead and then used his unique asset to make everyone at the Service bureau think he was their boss.[10]

This act allowed him to run the National Park Service and still work with HALO's company holder by using his persuasion abilities to convince everyone that he was his own director (and also keep sleeping with boss' wife who he grew to have an affection for).[11]

It is unknown what happened to him after the World's End event that decimated most of the Earth's population.