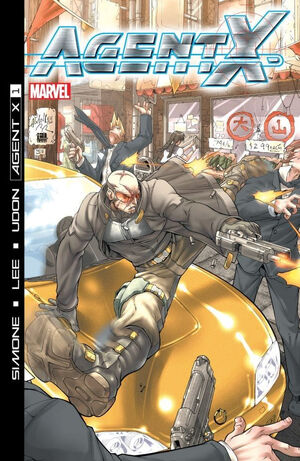 Appearing in "Dead Man's Switch (Part I of VI)"Edit

Synopsis for "Dead Man's Switch (Part I of VI)"Edit

A man bearing an x-shaped scar named Alex Hayden arrives at the doorstep of Sandi Brandenberg. He has no memory of who he is, but demonstrates remarkable healing ability. Sandi believes this man may actually be her old contact, Wade Wilson, also known as Deadpool. Alex stays with Sandi for several days, but has no luck with recovering his memories. One of Alex's clients, the Taskmaster, pays a visit and embroils himself in an altercation with Alex.

Sandi convinces the Taskmaster to take Alex under his wing and train him to be a mercenary. Taskmaster is not convinced that Alex is anyone other than Deadpool, a man her personally despises. However, he puts Alex through his paces and after several weeks of intense training, Alex begins to hate his mentor almost as much as his mentor hates him.

I gotta start lining up some paying work,Can't sleep on your couch forever -- I think you cat is developing an fatal attraction

Eventually Alex becomes ready to embark upon a career as a mercenary. Choosing the code name Agent-X he hires himself out to a man named Paul Steinen. Paul owns an animal preserve called Alpine Park, but recently all of his animals have escaped. Agent-X scours the city recovering various animals including orangutans, tigers, falcons and elephants. Steinen pays for the services by giving Agent-X the deed to his theme park.

Meanwhile, a Japanese crime lord named Higashi takes control of the Eastern Wind. His assistant, Saguri, is concerned that Higashi is not making a strong enough show of force in front of his underlings.

Retrieved from "https://heykidscomics.fandom.com/wiki/Agent_X_Vol_1_1?oldid=1545432"
Community content is available under CC-BY-SA unless otherwise noted.