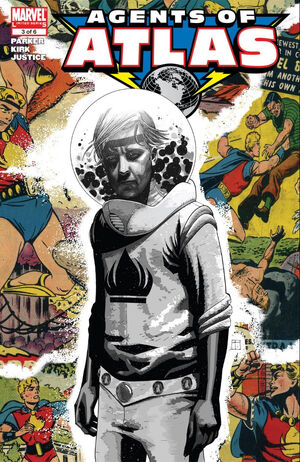 Appearing in "The Dream Team"Edit

Synopsis for "The Dream Team"Edit

Jimmy Woo's agents have all returned... and so has their greatest enemy, The Yellow Claw. Before they can face him, though, the team sets out to bring back one more hero of the Golden Age! Along the way we find out how Marvel Boy... got so weird.

Retrieved from "https://heykidscomics.fandom.com/wiki/Agents_of_Atlas_Vol_1_3?oldid=1407025"
Community content is available under CC-BY-SA unless otherwise noted.