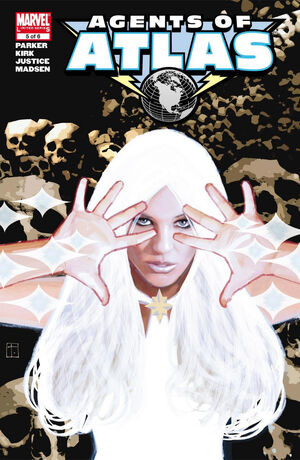 Appearing in "The People's Leader"Edit

Synopsis for "The People's Leader"Edit

Revelations show one of the team to be a double agent, and another something more horrific than their enemies. The Atomic Age alliance crumbles as the team has its own Civil War. The time to test the leadership of Jimmy Woo is here.

Retrieved from "https://heykidscomics.fandom.com/wiki/Agents_of_Atlas_Vol_1_5?oldid=1775297"
Community content is available under CC-BY-SA unless otherwise noted.