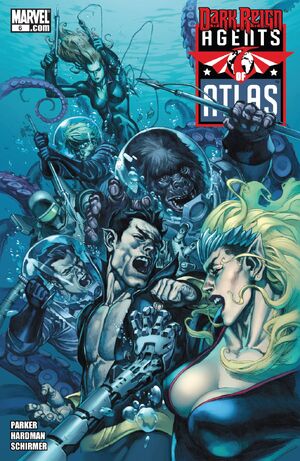 ...I guess they even got hillbillies under the sea.

Appearing in "Secrets of the Deep"Edit

Synopsis for "Secrets of the Deep"Edit

The Agents of Atlas decide the best way to undermine Norman Osborn is not through direct attacks, but rather through one of the members of his Cabal, Namor.

Namora recalls the history of Namor and Atlantis as the team flies over the Atlantic Ocean en route to coordinates Namora provided. Upon arrival, the Agents discover the city of Oceanus. As soon as they arrive, Namor appears saying none may enter his realm without his approval. Once introductions are made, he invites the Agents to dinner.

Namora discusses their situation with Namor over dinner, but Bob slips and reveals he was reading Namor's mind. a short scuffle ensues until Venus calms both sides down. Once the fighting ends, Namora and Namor embrace revealing their long-hidden love for each other. The Agents stay in Oceanus for a few days while Namora fulfills her duty to help lead the Atlanteans.

Retrieved from "https://heykidscomics.fandom.com/wiki/Agents_of_Atlas_Vol_2_6?oldid=1407034"
Community content is available under CC-BY-SA unless otherwise noted.