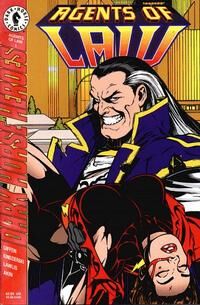 Appearing in "What Price Utopia?"Edit

Synopsis for "What Price Utopia?"Edit

In Golden City, the mayor and peacekeepers have vanished, leaving the city to be governed by vigilantes, and the only hope for them is a man called Law, who says he can bring Golden City back to its utopian past if he gets total control, but nobody can decide on whether he means well, or if he is a dangerous man.

Retrieved from "https://heykidscomics.fandom.com/wiki/Agents_of_Law_Vol_1_1?oldid=1685196"
Community content is available under CC-BY-SA unless otherwise noted.