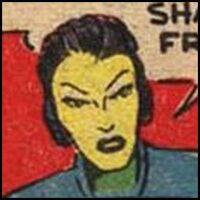 Your American justice will never punish me!

Princess Ah-Ku was the leader of a Chinese gang. Though she never "personally" committed any acts of crime, she was the "master" behind several brutal murders, the kidnapping of a millionaire's daughter, and an illegal alien smuggling system. Ah-Ku and her gang were also responsible for the killing of three of the members of the New York Chinatown as part of the plot to take it over.

When her smuggling operation made the news, she approached Walt Whitney. She pretended to be a Chinese princess who was concerned about the welfare of her people. The ruse fell apart when Walt went after the "Master" as Bob Phantom and unmasked her. Ah Ku was sly enough to slip away before she could be caught, but the experience made her paranoid. Every time she embarked on a scheme, she tried to neutralize Walt Whitney. Ironically enough, that only helped Bob Phantom stop her. The two had many altercations, but she eluded the authorities time and time again until she was finally caught in an altercation with Bob Phantom when he threw her own hatchet, thereby pinning her flowing robe to the wall.[1]

Her plans would have worked much better if she didn't go after Walt Whitney all the time.

Retrieved from "https://heykidscomics.fandom.com/wiki/Ah-Ku_(Earth-MLJ)?oldid=1576194"
Community content is available under CC-BY-SA unless otherwise noted.