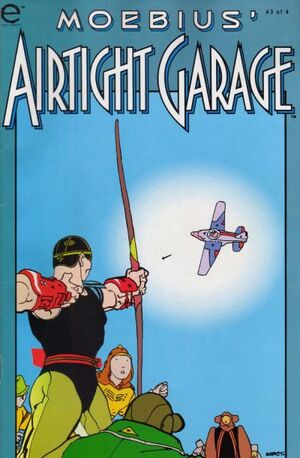 Major Grubert continues his inspection of the 2nd and 3rd levels of the Airtight Garage pocket universe. He is searching for the engineer Barnier who is lost within the Singing Caverns.

Barnier comes upon an archer who helps to guide him and wishes to learn the nature behind his exploding cable box accident.

Major Grubert meets Ardant Echoy and Orne Batmagoo who take him on a tour of the maze in the Lower City. He is taken to the great steam-powered engine in Armourth.

Malvina learns of Major Grubert's plight and seeks to help him. She summons Lark Dalxtrey to her quarters and uses her magic to spirit him through a dimensional loop on a quest to find Lewis Carnelian’s brother, Eric.

Grubert goes to a bar where he finds his android confidante Samuel L. Mohad. But before he can converse further, Ardant Echoy (who is in reality, the Bakali assassin Sper Gossi) tries to kill him.

Retrieved from "https://heykidscomics.fandom.com/wiki/Airtight_Garage_Vol_1_3?oldid=705377"
Community content is available under CC-BY-SA unless otherwise noted.