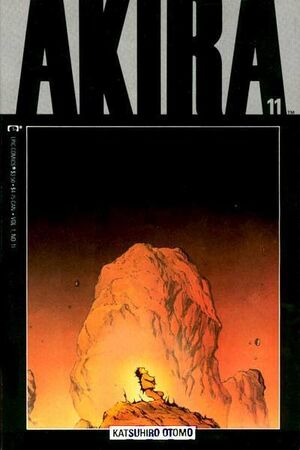 Shock waves in the wake of Akira being freed from his suspended animation chamber rock the secret government base and the city of Neo-Tokyo. Ultimately the awakening of this most powerful mutant child brings down a deadly laser attack from a circling defense satellite. Caught along with Akira in this attack from the heavens are Kaneda, Kay, and the malevolent teenaged mutant who freed him, Tetsuo.

Retrieved from "https://heykidscomics.fandom.com/wiki/Akira_Vol_1_11?oldid=705399"
Community content is available under CC-BY-SA unless otherwise noted.