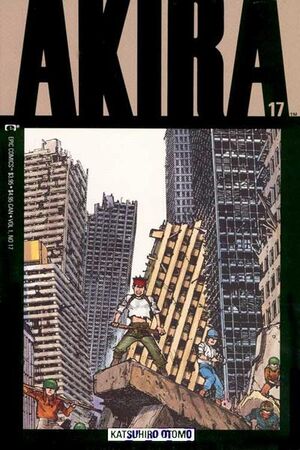 Appearing in "Emperor of Chaos"Edit

Synopsis for "Emperor of Chaos"Edit

The flood waters surrounding the remains of Neo-Tokyo begin to recede. Tetsuo has erected a shrine to the "Lord" Akira in the West, while Lady Miyako has established a convent for the survivors in the East.

A group of young survivors blockade the 7th district bridge and declare it the Great Tokyo Empire. These punks are loyal to Lord Akira.

Down in the lower depths, Kay and Chiyoko run afoul of a group of hardened Clown gang members. Several of them prepare to rape Kay, but Chiyoko intervenes with her mace. It is revealed that Chiyoko's mace doubles as a grenade launcher and she turns it against the Clowns.

Later, Chiyoko goes to a bar to get some info on recent events in the city. The bartender speaks of the followers who have committed themselves to Akira. They are turning out in droves in the hopes that Akira will use his powers to heal them. The military has been dispersed and many of the officers have disappeared. Little does Chiyoko know however, but the Colonel is sitting in the back of the bar listening to the conversation.

As many street punks attack and ravage caretaker robots, Kay makes her way to a shelter where she tends to the injured Masaru and Kiyoko. She provides them with drugs to help alleviate their withdrawal symptoms.

Tetsuo stands at the foot of the throne he has made for Akira. Akira sits silently and does nothing. Tetuso displays Akira's godlike majesty by healing an injured survivor. He then summons three members of the Great Tokyo Empire to his palace and forces them to take mind-enhancing drugs. He tells them that it will increase their mental powers – powers that they will need if they wish to serve as his personal bodyguards. But the drugs prove too powerful and two of the teens die from brain aneurysms. Akira looks onward as Tetsuo liberally consumes the pills himself.

Retrieved from "https://heykidscomics.fandom.com/wiki/Akira_Vol_1_17?oldid=705405"
Community content is available under CC-BY-SA unless otherwise noted.