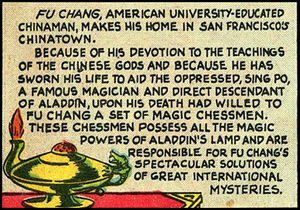 The Magical Chess Pieces originally owned by Aladdin were passed down through the generations until they came into the ownership of Sing Po, a wise and learned man, who bequeathed them at his death to his favorite student, Fu Chang. Fu Chang used the pieces to fight crime in San Francisco's Chinatown district and to protect his beloved Tay Ming for many years.

Retrieved from "https://heykidscomics.fandom.com/wiki/Aladdin%27s_Magical_Chess_Pieces_(Earth-MLJ)?oldid=1565796"
Community content is available under CC-BY-SA unless otherwise noted.