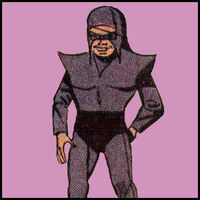 Purple Menace was one of several henchmen Eterno the Tyrant "materialized" to fight the Mighty Crusaders. He was originally a non-powered, costumed fan at a comic convention where Eterno found him and "transformed" him to a "real" super-villain. He was apprehended shortly after battling the "Mighty" team and changed back to a normal person.

Retrieved from "https://heykidscomics.fandom.com/wiki/Albert_Brenner_(Earth-MLJ)?oldid=1581669"
Community content is available under CC-BY-SA unless otherwise noted.