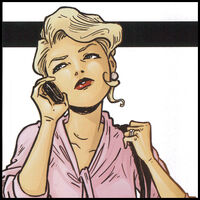 Many years ago Alexis married Paul Fritsche through an arrangement created by their mutual parents. Neither one was truly in love with the other, but they did get along fairly well as Alexis ran his companies while he played superhero.

It wasn't until Paul fell in love with his crime fighting partner, Agent Twilight that their marriage became strained.

Retrieved from "https://heykidscomics.fandom.com/wiki/Alexis_Fritsche_(Supurbia)?oldid=1658245"
Community content is available under CC-BY-SA unless otherwise noted.