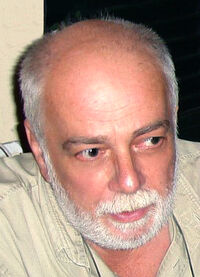 Alfredo Giuseppe Castelli (Milan, June 26, 1947) is an Italian comic book creator and literary critic. He is known above all for having created, in 1982, the Martin Mystère series, still published today by Sergio Bonelli Editore on a bi-monthly schedule. He is also a comics and popular literature historian

He debuts professionally in 1965, as an 18-year old, with the creation of Scheletrino, character featured as a humorous backup strip published in Diabolik. For Astorina he will also write several Diabolik plots (and later on scripts).

In 1966, before his twentieth birthday, he invents the first fan magazine (fanzine) on Italian comics: Comics Club 104. He would repeat this publishing experiment later on, with greater maturity and depth, in other magazines that inform, comment and teach about Italian comics (Tilt magazine is an example).

Starting 1966, and for several years, Castelli created many stories in Cucciolo and Tiramolla for Edizioni Alpe, as well as Topolino stories for Mondadori.

In 1969, together with Pier Carpi (another Diabolik writer) and Luigi Cozzi, Castelli creates Horror. This magazine would publish comics along with articles, interviews and news, revolving around the horror genre. It was published by Gino Sansoni (husband of Angela Giussani, the creator of Diabolik) and featured interviews with movie directors Lamberto Bava and Dario Argento, along with news on non-Italian and independent movies. It was able to create a certain fan base, even though the editorial staff had little experience, in part thanks to a character created specifically for the magazine: Zio Boris (Uncle Boris) who was the featured character in a horror/humor strip. In the same year, along with Mario Gomboli, Marco Baratelli and Carlo Peroni, he created Tilt, which started off as a fanzine (for only one issue), before restarting with the editorial staff of Corriere dei Ragazzi, along with the same creators, and with the addition of Tiziano Sclavi.

He started his collaboration with Corriere dei Ragazzi in 1970, creating numerous series, with creators such as Sclavi, Bonvi, Ferdinando Tacconi and Carlo Peroni. These series featured characters, that were clever and displayed fervid irony: L'Ombra, Otto Kruntz, L'Omino Buffo (Awkward Little Man), a self-parody drawn by Castelli himself, as well as the successful Gli Aristocratici, drawn by Tacconi (1973).

In Supergulp magazine he created Allan Quatermain who will serve as the model for the later creation of Martin Mystère. This character showed the creator's inclination towards the fantastique, adventure and historical genres. The series contained a fascination with all that which is mystery, as well as for research, in its more broader sense.

For Sergio Bonelli Editore, before Martin Mystère, Castelli wrote Zagor (in 1971 and later on in 1976). He worked on a continuous basis with the publisher starting 1976, first writing Ken Parker and then Mister No (more than sixty issues).

Castelli also edited, created and collaborated with many magazines: besides the already mentioned Il Giornalino, Corriere dei Ragazzi, Tilt and Horror, he also worked on Eureka edited by him, along with Silver, for a dozen issues (1983-84).

In recent years, in addition to being a creator and editor of comics, he has also taken on the role of historian. Castelli, in fact, carried out a long historical and philological research into comics' "origins", in the richly illustrated volume - titled Eccoci ancora qui (We're Still Here) (2006) - dedicated to late 19th century and early 20th century American comics.

Over the years various associations and bodies, linked to the world of comics, have dedicated several biographical publications to Castelli, including Castelli 25 (Associazione Nazionale Amici del Fumetto e dell'Illustrazione) to celebrate his 25 years in the business, Alfredo Castelli - Storie e Mysteri di un grande narratore (Alfedo Catelli - Stories and Mysteries of a Great Storyteller) (Napoli Comicon) and Castelli di Carta (Paper Castles) (Castelli is both his name as well as the word for castles in Italian) (Associazione Culturale Nipoti di Martin Mystère) both celebrating his fortieth year as a creator.

Retrieved from "https://heykidscomics.fandom.com/wiki/Alfredo_Castelli?oldid=1571095"
Community content is available under CC-BY-SA unless otherwise noted.