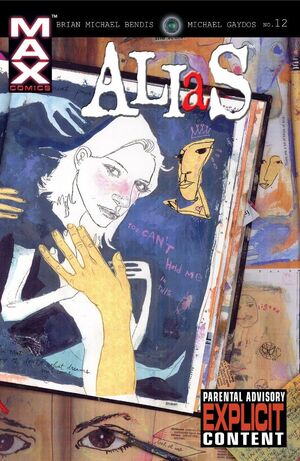 On her way to her car, Jessica is approached by local journalist Patrice Pugawa, who is desperate for updates on the investigation. Jessica refuses to divulge details, claiming that if someone did something to Rebecca, publishing information on the investigation would give the perpetrator the chance to cover his tracks. Patrice asks if Jessica means to attend church on Sunday, and Jessica admits that she likely will not, though Patrice says that she "really should."

Jessica reads through one of Rebecca's collage books before meeting with Sean at Tom's Bar. They further examine the books, and the sheriff notes Rebecca's fondness for Daredevil before asking Jessica what her "mostest fucked up case" was. The conversation is interrupted by Rebecca's father, who accuses Jessica of trying to ruin his life, but Sean manages to calm Mr. Cross down. Outside, Jessica and Sean kiss, and Jessica makes drunken advances until Sean hesitantly finally relents.

In her drunken stupor, Jessica dreams of her time as the costumed superhero Jewel and an encounter she had with Thor, but she sees Rebecca in a high window of a skyscraper and the dark shadow of a man looming behind her.

On Saturday morning, Jessica wakes in a cell at the Lago police station and is released by Sean. Jessica leaves the station and spots the town's church, recalling that Patrice told her that she "really should" attend. Jessica visits the church to find a preacher preparing an anti-mutant sermon in which he claims that "God didn't create...mutants. Man created mutants. Mutants are abonimation brought on by Man's greed."

Retrieved from "https://heykidscomics.fandom.com/wiki/Alias_Vol_1_12?oldid=1406417"
Community content is available under CC-BY-SA unless otherwise noted.