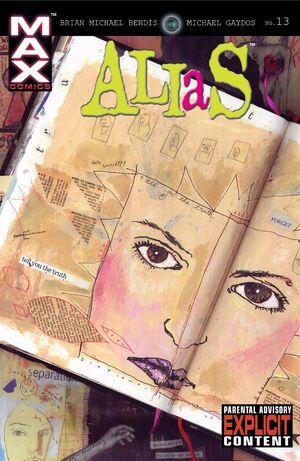 At the town's church, Jessica Jones confronts a preacher over an anti-mutant sermon he intends to deliver the next morning, accusing him of "preaching hate like some backwater shit-kicking hick."

At a local diner, she admonishes her own reflection in the mirror before spotting a graffito reading "JESUS WAS A MUTANT." As she leaves the bathroom, she spots Sean and tries to avoid him as she exits the diner, but he follows her, insisting that he likes her. Jessica counters that he doesn't even know her, and walks away as she receives a phone call from Scott Lang, who explains that Carol Danvers gave him Jessica's number before asking her out. She puts him off as she spots Patrice Pugawa through a window at the office of the Lago Observer.

Jessica heads into the office, and Patrice lets her read some of the anti-mutant hate-mail that the newspaper has received as evidence of the town's pervasive bigotry. Jessica apologizes for having previous brushed Patrice off, and learns that the townspeople of Lago adore the preacher at their church, as well as a horrific story of a young boy died after he was savagely beaten with beer bottles a few years previously because of a rumor that he was a mutant. Patrice explains to Jessica that Rebecca was not, in fact, a mutant, and that her classmates had spread the rumor because "she dressed different – she behaved different." Jessica shows Patrice the collage books that Rebecca made, and when she explains that she still wants to talk to Rebecca's father, Patrice admits that half of Lago thinks he is guilty.

Later, Jessica visits the home of Edward Cross to him stabbed to death in the chair in his living room. In the background, a commentator on television discusses the recent rumors that Matthew Murdock is the vigilante Daredevil, and laments the fact that "we as a society have this compulsive need to hurt those who would protect us."

That evening, Jessica watches Sean coordinate the crime scene as Mr. Cross's body is removed from his house. Sean points out a teenage bystander to Jessica, and she asks him where Rebecca is.

Retrieved from "https://heykidscomics.fandom.com/wiki/Alias_Vol_1_13?oldid=1406418"
Community content is available under CC-BY-SA unless otherwise noted.