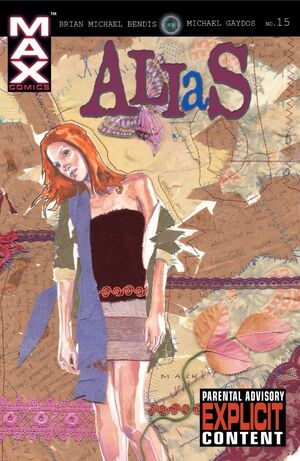 Appearing in "It's Raining Men"Edit

Synopsis for "It's Raining Men"Edit

Natasha Romanov arrives at the Law Offices of Nelson and Murdock, passing by Jessica Jones and Luke Cage on her way into Matt Murdock's office. Jessica critizes Cage for his substandard "bodyguarding" abilities, and the two argue about the night that they had sex, and when Jessica calls Cage a "cape-chaser," he responds by accusing her of being mad at herself. Finally, the two reconcile, discussing the likelihood that Murdock is Daredevil as Romanov leaves the office. Cage asks Jessica out, but she claims to have plans.

Later that night, Jessica meets Scott Lang for dinner, but when she orders a double vodka, he suggests that she not drink alcohol. Jessica agrees, but brings up Scott's time in prison, and he responds that he "left a better person then when [he] went in and [he] never went back." Jessica claims that Carol set them up because Scott is someone that Carol would have slept with had he not served time, and Scott admits to being divorced and having a daughter. The two discuss the difficulty of dating as superheroes, but their conversation is interrupted by Spider-Man and the Human Torch chasing Doctor Octopus down the street.

They both decline to join the pursuit, returning to dinner.

The issue shares its title with a 1979 song.

Retrieved from "https://heykidscomics.fandom.com/wiki/Alias_Vol_1_15?oldid=1406420"
Community content is available under CC-BY-SA unless otherwise noted.