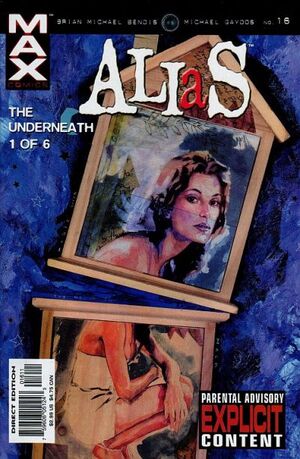 Appearing in "The Underneath (Part 1 of 6)"Edit

Synopsis for "The Underneath (Part 1 of 6)"Edit

Jessica browses magazines at a convenience store moments before it is robbed. Jessica attempts to hit the robber with a can and misses, then tackles him instead, giving his gun to the store owner who then nearly shoots the robber before Jessica manages to calm him down.

Jessica returns home, vowing never to leave the house again, and discovers a teenage girl in a Spider-Man costume in her bathroom. The girl panicks and throws herself out of Jessica's window, crashing into the side of a nearby building. Soon after, Scott Lang visits the apartment and suggests that Jessica call the police, but she refuses, though she agrees when he invites her to stay at his house for the night.

Later that night, Jessica searches for Spider-Girl online and finds nothing, and resorts to calling Clay Quartermain, who informs Jessica that the girl was Mattie Franklin, who "did a short run as Spider-Woman. The third one."

That night, J. Jonah Jameson leaves the Goodman Building to meet his wife at the theatre, but he is approached in the parking garage by Jessica, who asks about Mattie.

Jameson mentions the murder trial of the White Tiger, at which Jessica served as a character witness on behalf of Hector Ayala in Daredevil #39 (page 13).

Retrieved from "https://heykidscomics.fandom.com/wiki/Alias_Vol_1_16?oldid=1406421"
Community content is available under CC-BY-SA unless otherwise noted.