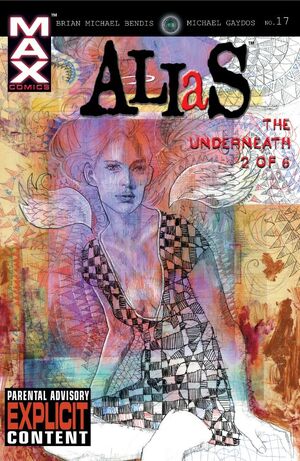 Appearing in "The Underneath (Part 2 of 6)"Edit

Synopsis for "The Underneath (Part 2 of 6)"Edit

Jessica has sex with Scott, but can't seem to enjoy herself and tells him to stop. She blames herself for being "in a shit mood," and tells him about her investigation earlier in the day.

She had met with J. Jonah Jameson in the parking garage of the Goodman Building to ask him about Mattie Franklin, who had lived with him and his wife for a time, but he accused Jessica of trying to extort money from him before demanding Mattie's safe return.

She later had returned to her office and considered what she knew about the situation, and decides to contact Jessica Drew, whose name appeared "in Mattie's tiny S.H.I.E.L.D. file." Jessica called Drew Investigations in San Francisco, learning that Drew is in Istanbul on assignment for the month, and leaving a message on Drew's cellphone regarding Mattie's situation.

While deciding what to do next, Jessica received another visit from Malcolm, who asked her opinion on Steve Rogers's admission that he is Captain America and the rumors that Matt Murdock is Daredevil. Malcolm begged her to let him help her, and Jessica finally agreed that if Malcolm could turn up any information on Mattie Franklin, she would hire him part-time.

After Malcolm left, Jessica received a phone call from Madame Web, who instructed Jessica to visit her that evening. At quarter-after-seven, Jessica arrived at Web's address, and learned that Web had been present at "the ceremony when [Mattie] received her powers." Web explained that she had used her psychic abilities to help Mattie, but that she had lost contact with Franklin, but as she talked with Jessica, she claimed to see Mattie again in a vision in which Jessica and Mattie fought to the death. As Jessica attempted to understand Web's prognostications, the old woman experienced a vision of Jessica's own tortured past. Jessica became enraged at the intrustion into her mind, and stormed out.

At Scott's apartment, Jessica refuses to explain what Web might have seen.

Retrieved from "https://heykidscomics.fandom.com/wiki/Alias_Vol_1_17?oldid=1406422"
Community content is available under CC-BY-SA unless otherwise noted.