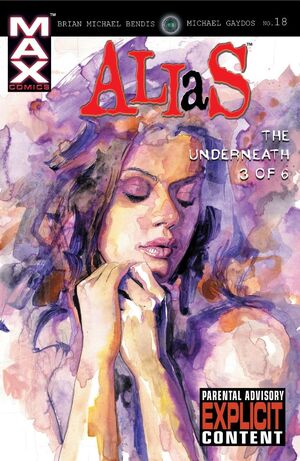 Appearing in "The Underneath (Part 3 of 6)"Edit

Synopsis for "The Underneath (Part 3 of 6)"Edit

At Scott's apartment, Jessica refuses to discuss the events from her tortured past that Madame Web had seen. Scott urges her to continue, and the two argue until Jessica storms out of the apartment.

Back at her own apartment, Jessica drinks a glass of wine and listens to Carol Danvers leave a message concerning Scott. After Carol hangs up, Jessica recalls the night that Mattie stumbled out of her bathroom.

The next morning, Jessica heads to the home of Matt Murdock to walk him to work as his bodyguard, lamenting the fact that he refuses to tell her the truth about his superhero identity. Jessica tells Matt about her conversation with Jameson, and Matt promises to call Jameson and tell him to "please stop threatening my client." Their conversation is interrupted by Tara Woods of ABC News, who asks Matt for a comment "about allegations or the upcoming trial."

Later in the day, Jessica returns to her office to find Malcolm outside with a classmate of his, Laney, who claims that her brother is dating Mattie Franklin. Laney explains that her brother has recently started spending a lot of money on cars, clothes, and a condo, and she is convinced that he's gotten himself "deep into some big dealings." She tells Jessica that her brother and his partner hang out at Club 616.

That night, Jessica visits Club 616, but is refused admittance because of her outfit. She rushes home and changes into skimpier clothes and puts on make-up, returning to the Club where the bouncer lets her in. Inside, she heads for the line of women outside the bathroom and asks if anyone knows where to find Denny. A woman offers to introduce her and escorts Jessica to the back of the Club where she finds Denny with Mattie laid across his lap.

Retrieved from "https://heykidscomics.fandom.com/wiki/Alias_Vol_1_18?oldid=1493587"
Community content is available under CC-BY-SA unless otherwise noted.