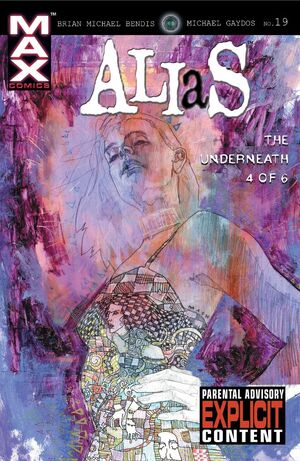 Listen up, bitchcakes. I'm Jessica Drew and what you just got a faceful of was my spider-bite. Where the fuck is Mattie Franklin?

Appearing in "The Underneath (Part 4 of 6)"Edit

Synopsis for "The Underneath (Part 4 of 6)"Edit

In the back room of Club 616, Jessica tries to decide how to extricate a drugged Mattie Franklin from the building, but recalls Madame Web's prediction and tries to leave. Denny asks Jessica if she's a cop, and when she denies it, he asks if she wants to get high. Jessica agrees, and witnesses Denny manipulate Mattie into letting him dig out a clump of her tissue, which his friends cook so that they can inhale the fumes. Jessica attacks one of the parties, but he throws her off, having temporarily acquired superpowers from inhaling the fumes Mattie's cooked blood.

Barely conscious, she is thrown out into the alley behind the club, where she is found by Ben Urich, who has been following her on Jameson's orders. Jessica tells him that Mattie had been inside the club and describes what Denny did to her, and Urich explains that Denny and his friends are using Mutant Growth Hormone, "a street drug" that "gives normal people not so normal abilities," and that he has heard of a few "B-level super heroes...selling parts of themselves, or trading it." Jessica affirms her resolve to find Mattie.

Urich drops Jessica off at a hospital, where she is examined and treated by Dr. Cirello and questioned by police officers before being released. She returns to her apartment, where she begins to undress before she is attacked with an electrical surge by Jessica Drew, who demands to know the whereabouts of Mattie Franklin.

Retrieved from "https://heykidscomics.fandom.com/wiki/Alias_Vol_1_19?oldid=1529244"
Community content is available under CC-BY-SA unless otherwise noted.