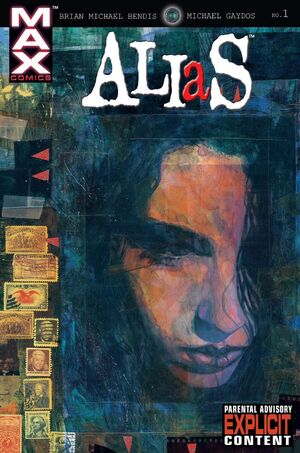 Jessica Jones, a private investigator in New York City, meets with a client to hand over evidence that his wife has cheated on him. The evidence also shows that his wife is a mutant, which enrages the client to the point that he attacks Jessica. She reacts by throwing the man through the window of her office door.

Soon after, NYPD officers make out a report on the incident, and discover that she used to work as a costumed superhero alongside the likes of Thor, Iron Man, the Wasp and Ms. Marvel. The incident inspires Jessica to heads to a bar owned by Luke Cage, and the two later return to Cage's apartment to spend an intimate evening together.

The next morning, Jessica returns to her office to find a woman who is desperate to hire Jones to find her sister, Miranda Pritchett. The woman relays a tale of Miranda's youthful indescretions before discussing her Miranda's attempts at "getting her shit together," which include a new boyfriend that she fears her sister has fallen for too quickly. The woman tells Jessica that after explaining her apprehensions to Miranda, her sister disappeared from her apartment and job without a trace.

Jessica claims that people with troubled pasts sometimes go missing in order to make a fresh start, but after the woman insists, Jessica agrees to try. That evening, Jessica runs an Internet search, and discovers that Miranda still lives in New York. She then stakes out Miranda's home until the woman returns with her boyfriend, recording a video as evidence of Miranda's well-being. She also records video of the boyfriend receiving a page and hurrying away, though not through the front door: from the roof, after donning the iconic costume of Captain America.

Retrieved from "https://heykidscomics.fandom.com/wiki/Alias_Vol_1_1?oldid=1529235"
Community content is available under CC-BY-SA unless otherwise noted.