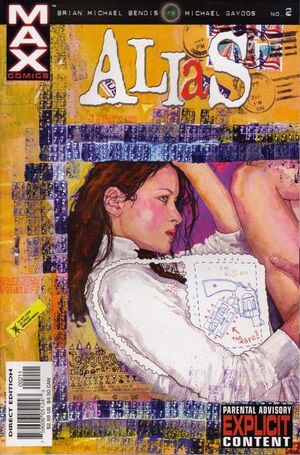 After inadvertantly recording a videotape of Captain America's secret identity, Jessica returns home, staking out her apartment for nearly an hour before heading inside and finding it empty. She watches the video again, confirming that she did in fact record Steve Rogers donning the costume of Captain America. She contemplates destroying the tape, but hesitates, considering that the tape may be her only leverage against the people who set her up to record it.

She decides to call her client instead, but finds the phone number disconnected, and hires a taxi to drive her to the client's address, where she discovers a storefront. Finally, she returns to the address of client's sister, and finds a crime scene where she learns that a woman has been strangled. Desperate, Jessica heads to Luke Cage's apartment, where she is turned away by a woman spending the night with Cage.

The next morning, Jessica visits Avengers Mansion in an attempt to talk to Steve Rogers, but learns that the Avengers are deployed on a mission. Out of options, she returns to her office where she finds NYPD Detective Paul Hall waiting to question her about Miranda Pritchett. Jessica lies about knowing that Miranda was murdered, and Hall produces a photograph of the crowd at the crime scene proving that Jessica was at Miranda's house the previous night. Hall asks Jones to accompany him to the police station.

o THE SET-UP: Meet Jessica Jones, a former costumed super hero who, unfortunately, stunk at it. With powers unremarkable in comparison to THE great icons of Marvel, Jessica never found her niche. But once she hung up her cape, she was surprised at how quickly she fell out of the spandex loop. Sure, she may hang out with some of the Avengers socially, but she's not welcome in Avengers Mansion. And she feels the rejection. She`s self-destructive, drinks too much, and has a huge inferiority complex. And did we mention that she's now a Private Investigator who specializes in cases of the superhuman variety?

o THE STORY: Following the startling revelations of the end of last issue, Jessica follows a trail of heartache and murder... leading to help from a reluctant ally -- and another wrenching encounter with Luke Cage, Hero for Hire!

o THE BUZZ: "Whether you're a comic book fan looking for a mature take on superheroes, or a reader of crime-fiction who has never read a comic book before, ALIAS should please on both counts. A+" -Aint-It-Cool-News.com

Retrieved from "https://heykidscomics.fandom.com/wiki/Alias_Vol_1_2?oldid=1406407"
Community content is available under CC-BY-SA unless otherwise noted.