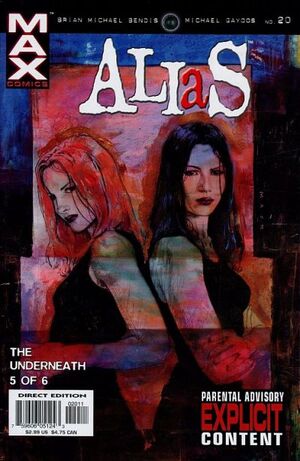 Appearing in "The Underneath (Part 5 of 6)"Edit

Synopsis for "The Underneath (Part 5 of 6)"Edit

In her apartment, Jessica is attacked by Jessica Drew, who demands to know the whereabouts of Mattie Franklin. Jones informs Drew that it was Jones herself that called Drew, and after Drew confirms it by listening to her voicemail, Jones knocks Drew out with one punch. Soon after, she receives a call from Ben Urich, who informs her that Jameson wants to meet her with.

Jones, Urich, and Drew visit Jameson at his home, and Jonah's wife explains the nature of their relationship with Franklin before asking Jones to find Mattie for them. Back at her office, Jones runs an Internet search on Mattie, and finds an address for Denny Haynes. Jones and Drew head to the address, but find the apartment empty, and Drew calls a Special Agent Jeff Hunt to have him trace Denny's credit card, which was used to check in at the Matador Hotel.

Jones and Drew head to the Matador and find Haynes's room, where they overhear Denny arguing with Speedball before breaking through the door. Inside they find Mattie comatose on the bed as Speedball loses control of his powers.

Retrieved from "https://heykidscomics.fandom.com/wiki/Alias_Vol_1_20?oldid=1406425"
Community content is available under CC-BY-SA unless otherwise noted.