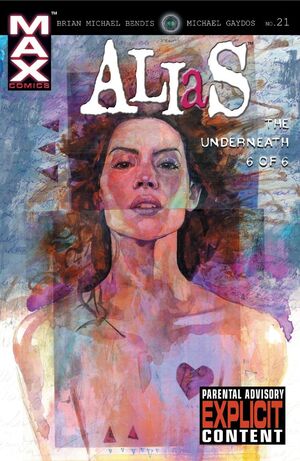 Appearing in "The Underneath (Part 6 of 6)"Edit

Synopsis for "The Underneath (Part 6 of 6)"Edit

In Denny Haynes's room at the Matador Hotel, Speedball panicks and loses control of his powers, and Jessica passes out as Mattie Franklin lies comatose on the bed. While unconscious, Jessica experiences a hallucination in which she, as the costumed superhero Jewel, is attacked by the the Hulk, the Silver Surfer, Dr. Strange, Namor, Thor, and Valkyrie.

Jones regains consciousness as Denny attempts to flee the room and stops him from escaping by throwing him into Speedball, then fights the man who punched her at Club 616. Drew electrocutes the man, and Jones cracks him across the face with a telephone and smashes a television onto his head.

After the fight, Jones and Drew learn that Speedball had been attempting to set up Denny, and that he is working with the NYPD, who promptly break into the room. Drew holds them back while Jones flees through the window with Mattie, hailing a taxi and evading the police in Times Square.

Six weeks later, Jones is visited by Mattie and Marla, and Mattie thanks Jessica for saving her life. Mattie tries to explain how she wound up where Jessica found her, and Jessica assures her that she understands completely. Mattie gives Jessica a framed clipping of a newspaper article titled "SUPERHERO TEAM UP TRIO SAVE MYSTERY TEEN FROM DRUG DEALING PARASITES." Jessica asks what Mattie meant when she said "they lied to me" when she broke into Jessica's apartment, but Mattie has no memory of the night.

That evening, Jessica leaves her office and finds Scott Lang waiting on the sidewalk. He attempts to apologize for not contacting her for six weeks, but she yells at him until he admits that he is in love with her. He tells her that she is better and smarter and prettier than she believes that she is, and asks her out on "a fancy date." Jessica accepts.

Jessica next appears in her capacity as Matt Murdock's bodyguard in Daredevil #46, in which she escorts Murdock and Milla Donovan to a restaurant, on the way to which Murdock is attacked by Typhoid Mary (page 19). The altercation continues in Daredevil #47, in which Jessica witnesses Mary pyrokinetically light Murdock on fire (page 21). In Daredevil #48, Jessica hurries Milla to safety before launching herself at Mary and fighting the woman in the middle of the street. Mary lights Jessica's arm on fire, and Jessica is hit by a car before Mary slices her with a katana, but Luke Cage intervenes, and he, Jessica, and Murdock manage to incapacitate Mary (pages 2-10).

Retrieved from "https://heykidscomics.fandom.com/wiki/Alias_Vol_1_21?oldid=1500060"
Community content is available under CC-BY-SA unless otherwise noted.