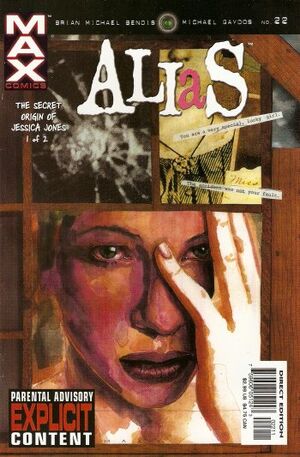 "Fifteen years ago," Jessica Campbell witnessed her Midtown High School classmate, Peter Parker being teased by their fellow students. Jessica, holding a notebook with "Jessica + Peter" written on the cover, resolved to ask Parker out that day, and followed him into a "Science Exhibit" displaying "Experiments in Radio-Activity" that are "Open to the Public."

During the demonstration, Jessica was about to approach Parker, but he was bitten by the radioactive spider that granted him his super powers and left the building. Jessica followed after him, but lost sight of him and was nearly run down by an "Ajax Atomic Labs" truck before a man pulled her to safety. Jessica fled the scene.

At home that night, Jessica tried to pleasure herself to her pictures of the Human Torch, but was interrupted by her younger brother Phillip. Humiliated, she ordered him out of her room.

Some time later, Jessica's family took a trip to Disney World with tickets given to them by her father's boss, Tony Stark. Jessica and her brother listened to their parents argue as the car pulled alongside a military convoy, and Jessica's father became distracted after she pinched Phillip and called him a "little fucking asshole." Her father lost control of the vehicle, which swerved and slipped beneath one of the military trucks, crushing the vehicle as a canister of "hazardous experimental material" tumbled into Jessica's lap. The car was subsequently thrown from the highway onto an embankment where it landed on its roof and burst into flames.

Six months later, Jessica regains consciousness in a hospital while a battle between Galactus and the Silver Surfer rages outside.

Having lost her parents and brother in the crash, Jessica lives at the Moore House for Wayward Children until eventually being adopted by the Jones Family, who happen to live in her old neighborhood of Forest Hills. The proprietor of Moore House assures Jessica that the crash that killed her family was not her fault, and that she is being "given a second chance in life."

The flashback scenes to Jessica's time at Midtown High are presented in the visual style of Silver Age comics. Page 1 of Alias #22 is a reproduction of page 1 of Amazing Fantasy #15, with the third dialogue balloon of AF15 being moved to the first panel of page 2 of this issue. The two issues further match up as follows:

Retrieved from "https://heykidscomics.fandom.com/wiki/Alias_Vol_1_22?oldid=1509450"
Community content is available under CC-BY-SA unless otherwise noted.