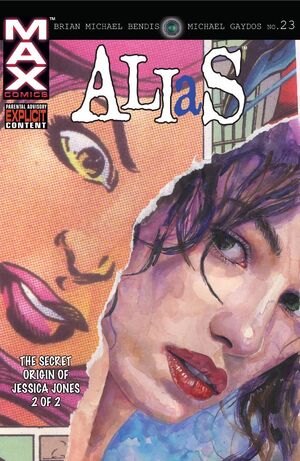 Young maiden of Midgard, thy language leaves something to be desired.

"Fourteen years ago," Jessica was adopted by the Jones Family and returned to Midtown High School, where she was mocked by her classmates for being a "freak coma girl," to which she told Flash Thompson to "just die" before storming off. She flees to the football stadium bleachers, where Peter Parker finds her and tries to explain that he understands her situation. Jessica mistakes his sympathy for pity, and storms away again, fleeing the school and rushing home.

On the way, Jessica recalls the car crash, her family, and her classmates mockery, and inadvertantly begins to fly uncontrollably, crash-landing in the Hudson River. Sinking, she wills herself to fly out of the water and manages to break the surface, but promptly falls back in again. Clamoring for air, Jessica slips back under again, and is finally pulled to safety by the timely arrival of Thor, who returns Jessica to a pier before taking off again.

Some time later, Jessica watches J. Jonah Jameson deliver "an 'Editorial Point of View'" on television in which Jameson calls Spider-Man "a menace" and "a criminal." Jessica discusses superheroes with her adoptive father, who claims that Spider-Man is disliked while the Fantastic Four are liked because of image: the Fantastic Four don't hide their identities from the public.

Jessica heads out to the park, testing the limits of her strength by knocking down a tree with her bare hands, and learning how to control her ability to fly. Nearby, the Scorpion robs a laundromat, but is interrupted when Jessica lands on him, incapacitating him. The onlookers express their gratitude, and compliment her on not wearing a costume.

Retrieved from "https://heykidscomics.fandom.com/wiki/Alias_Vol_1_23?oldid=1533498"
Community content is available under CC-BY-SA unless otherwise noted.