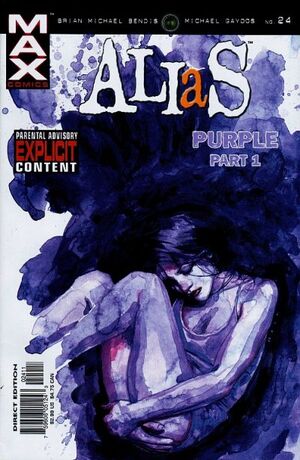 At the office of Murdock and Nelson, Matt Murdock introduces Jessica to Lord Kevin Plunder, who he wants to hire Jessica to find his sabretooth tiger Zabu, which has gone missing. Jessica declines and leaves.

Back at her office, Jessica listens to her phone messages and considers "the wackos" who have tried to hire her "ever since the Daily Bugle said something nice about" her. She considers calling Murdock to apologize for her hasty departure, but is distracted by a message from Kim Rourke, who wants to hire Jessica to find a man named Killgrave. Jessica bolts for the bathroom and promptly throws up in the toilet.

At Avengers Mansion, Jessica confronts Carol about referring Rourke to her considering her past with Killgrave. Captain America invites Jessica into the Mansion for tea, but Jessica flee instead and hails a taxi, but once inside, Scott Lang materializes next to her, having slipped into the vehicle at his insect size. He claims to "know all about what happened with Killgrave," but Jessica demands that he respect her boundaries and flees the cab, flying away.

Jessica crashes on the rooftop of her office building and head inside to listen to Rourke's message again. She decides to visit Rourke's home, where she finds a gathering of nearly a hundred people, and Rourke explains that 34 people were recently killed in a restaurant when Killgrave told them to stop breathing. Jessica explains how the Purple Man got his powers, and describes the psychoactive process by which Killgrave is able to "overpower people's wills."

She tells Rourke that Killgrave is locked away on the Raft, but Rourke explains that she and the rest of the people in the room are the family of victims who they believe were murdered by Killgrave. He refuses to admit to the killings, however, and they implore Jessica to help them find closure. Jessica agree.

Retrieved from "https://heykidscomics.fandom.com/wiki/Alias_Vol_1_24?oldid=1406429"
Community content is available under CC-BY-SA unless otherwise noted.