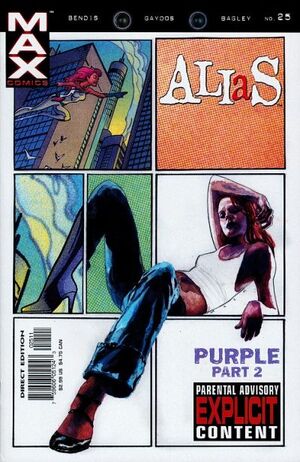 Jessica wakes in an apartment she doesn't recognize and searches out her clothes until Luke Cage returns and explains that Jessica called him drunk before arriving at his apartment. Jessica tells Luke about the case that she was hired to investigate, and explains that she has history with Killgrave...

"A few years ago," Jessica, as the costumed superhero Jewel, happened upon a fistfight in a restaurant, and discovered that Zebediah Killgrave had told the men to fight. Killgrave then overpowered Jessica's will and told her to "take care of the police" so that he can finish his meal, which she did.

Jessica tells Luke that Killgrave never raped her in the eight months that he kept her hostage, but that he made her watch him have sex with other girls, and told her wish he were having sex with her and to cry while she watched, as well as making her beg him to have sex with her. She explains that Killgrave made her beg him for sex in retaliation for all of the times that he had been defeated by Daredevil and Spider-Man, and that even though she knows that her thoughts and actions during that time were implanted by Killgrave, they still felt exactly the same to her as her own. And she tells Luke that Killgrave made her hurt people...

While under Killgrave's control, Jessica listened to him rant about Daredevil, after which he ordered her to find and beat him with instructions to kill any other superhero she encountered. Jessica flew to Avengers Mansion, feeling the psychoactive effects of Killgrave's pheromones wearing off as she attacked the Scarlet Witch, after which she came to her senses and fled with Thor in pursuit.

Retrieved from "https://heykidscomics.fandom.com/wiki/Alias_Vol_1_25?oldid=1406430"
Community content is available under CC-BY-SA unless otherwise noted.