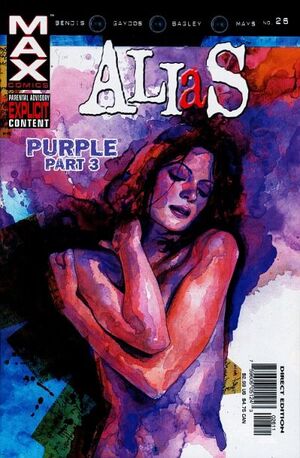 At Luke Cage's apartment, Jessica describes her altercation with Thor...

Jessica dodged the first swing of Thor's hammer, but was struck by a blast from one of Iron Man's repulsors and attacked by the combined force of the Avengers and the Defenders.

Jessica describes the various injuries she sustained before she lapsed into a coma...

In a manga-styled coma-dream, Jessica encountered a girl who told her that Daredevil had captured the Purple Man, who was locked away in The Raft. The girl revealed that she was Jean Grey, one of the X-Men, and asked Jessica to trust her. Jessica then woke up "in a S.H.I.E.L.D. military hospital outside of Washington, D.C.," and met agents Nick Fury and Clay Quartermain.

"A few months" later, Jessica completed rehabilitation and met with the Avengers again, and Tony Stark apologized profusely for the group's treatment of her. Jessica apologized to Wanda as well, and was shocked when Fury offered her a job as "the S.H.I.E.L.D. liaison to the Avengers." She insisted that she had "the opposite of having what it takes" to be a costumed superhero, and declined the offer.

In Luke's apartment, he offers to take over the Killgrave investigation, but Jessica insists that she will finish it.

Some time later, Jessica travels to The Raft off the coast of Ryker's Island and meets with Quartermain, who escorts her through the prison to Killgrave's holding cell

Retrieved from "https://heykidscomics.fandom.com/wiki/Alias_Vol_1_26?oldid=1406431"
Community content is available under CC-BY-SA unless otherwise noted.